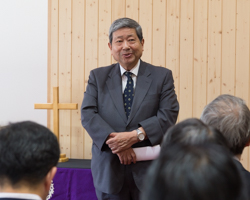 On Thursday, July 27, a dedication ceremony was held for the newly-completed kyūdō facility, which had been under construction since last December. In addition to members of J. F. Oberlin University’s kyūdō team and representatives of the companies which designed and built the facility, the ceremony was attended by members of the university’s faculty and staff, including Chancellor Toyoshi Satow and President Takayasu Mitani. Toshiyoshi Dobashi, one of the university’s chaplains, officiated at the ceremony, which took the form of a Christian service, and Yoshihiko Ishiyama, the coach of the kyūdō team, performed the traditional shooting of the first arrow. 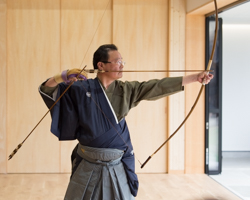 Standing next to Rōjitsukan near the southwest corner of Machida Campus, the new facility bears the name Shiunkan, just like the two kyūdō facilities that preceded it, and it is constructed entirely of wood. According to Yū Furuhashi, who supervised the design of the facility for Furuhashi Architect and Associates, the design utilizes new advances in wooden building materials as well as new ideas about how wood can be used, resulting in a thoroughly modern design.

The ceremony was followed by a reception in the facility’s peaceful interior, at which President Mitani commented, “I hope that this facility will enable the team members to practice even more and that it will be the setting for memories that they will carry with them forever, as they travel down a lifelong road of kyūdō.” 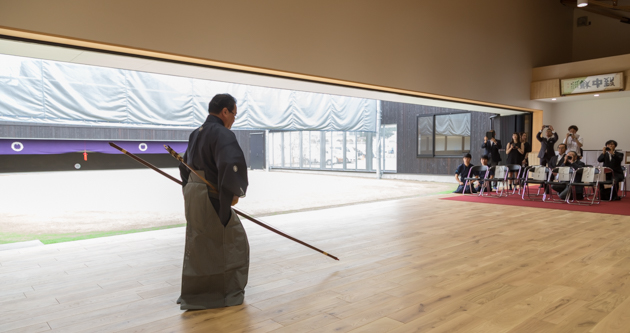