On April 20, Toyoshi Satow, Chancellor of J. F. Oberlin University and Affiliated Schools, met with Antonio Guterres, the new secretary-general of the United Nations, who took office on January 1 this year. They discussed UNAI (United Nations Academic Impact), a collaboration between the UN and an international network of universities, and ASPIRE, a project primarily administered by students, and they reaffirmed their commitment to both of these important projects. In his positions as president of the IAUP (the International Association of University Presidents) and vice-chairman of the APUJ (the Association of Private Universities of Japan), Chancellor Satow expressed his desire to see a further strengthening of the cooperation between the UN and institutions of higher education. He also told Secretary-General Guterres of his wish to see the UN’s Sustainable Development Goals expanded to include not only industries but also educational institutions at all levels, in order that students might play a role in designing and creating a brighter future for all, saying that he felt the SDGs need to be integrated into curricula as a core element. 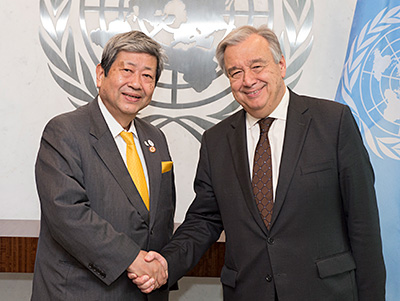